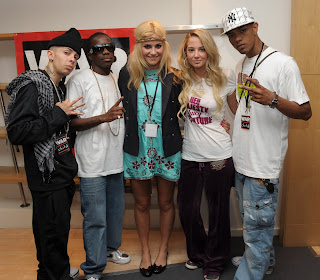 Here's a selection of the coverage we've gained for War Child's Young Soul Rebels single "I Got Soul" - OUT NOW! (And doing rather well in the midweeks - click here to get your copy)

Popjustice "Its structure is somewhat 'cavalier' and one or two parts are downright shit charity or not but there's something very nearly brilliant about this Young Soul Rebels (ie War Child) 'I Got Soul' track. The best bits come from Vincemusik (near the end), Chipmunk and - who'd have thought? - Tula N-Dubz." Click here to see the feature

ITN.co.uk "Tinchy Stryder, N-Dubz, Chipmunk and Ironik are ready to do chart battle. They are not going up against each other though, instead they are releasing a new single together. The biggest names in British urban music have teamed up to record as The Young Soul Rebels, supporting charity War Child." Read the full piece here

Drowned In Sound (!!) "But let's be entirely - and I mean entirely - serious for a second. War Child are shockingly useful sorts who do practical things for children what are almost guaranteed to have had a shitter time than you. So rather than buy this single, have a think about donating the three quid you might have spent on that final, unnecessary pint that sendsyouovertheedgeintotheboozechasmofdoom. You can do that here." Read the full review here

Digital Spy "it's all for such a worthy cause, you'd have to be a real grump to knock their efforts"

NME.com "Girls Aloud's Cheryl Cole releases her debut solo single 'Fight For This Love' today (October 19), though she's up against the Young Soul Rebels' version of The Killers' 'All These Things That I've Done'(which has been re-titled 'I Got Soul'). Young Soul Rebels feature the likes of Pixie Lott, Tinchy Stryderand Frankmusik, and the track is raising money for War Child."

BBC Chartblog "The people who get to have a go at the singing bits do a good job, by and large. Keep an ear out for Dappy N-Dubz inserting some much-needed grammatical correctness when he sings "all these things that I HAVE done", and Pixie Lott lisping a bit at the beginning. Oh, and VV Brown's bit is good too. And if we still can't handle a bit of rapping, some 30 years after hip hop started, we're not really evolving quickly enough, culturally speaking. There again, if you don't like it, but you support the cause, why not donate the cost of the single and then whack the Killers version up dead loud? That's the gentleman's way out." Read the full feature here

The Guardian "Despite having a name that references one of the finest albums of the 1980s, Young Soul Rebels actually include Tinchy Stryder, Pixie Lott and VV Brown. Which means two things: a) the definition of rebel has been rewritten to mean "mediocre music proffered by personality voids" and b) it's charity-single time. Just when you think it couldn't get any worse, the chorus – "I've got soul, but I'm not a solider" – samples the Killers, presumably to reference the fact the single is in aid of War Child. It's enough to make Dexy's Kevin Rowland turn in his grave. If he was dead, that is, and not busy maintaining his MySpace page and DJing at the Big Chill."