Sugarscape "Stonefield. They're Here To Change Your Life"

Suddenly hanging around in the shed seems cool not weird. 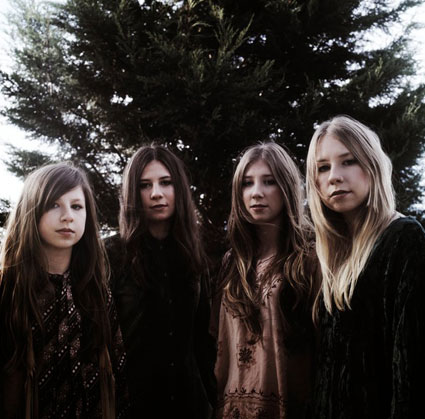 Made up of the four Findlay sisters, Amy (21), Hannah (18), Sarah (15) and Holly who is only 13, the girls discovered they could rock our socks off when they started bashing a drum kit in their shed. Bashings soon turned into super sweet sounds influenced by Led Zeppelin, Frank Zappa and Jimi Hendrix.

Jesus, we spent time chopping our sisters’ hair off and pushing them off bikes.

After playing gigs and festivals throughout Australia, the UK has finally caught on to their brilliance and the girls have been asked to play Glastonbury, which might just be the coolest thing for any band to do EVER.

Er hello coolness, where have you been all our lives?

If you have functioning ears and therefore think Stonefield rock, then you can get Through The Clover on a five-track EP of the same title, out June 20th.

For more info on the band, check out http://www.myspace.com/stonefieldtheband

Love these girls? Then tell us about it here why don’t you.

NME "10 Tracks You Have To Hear This Week" Ft Lovelle

"The debut single from 20-year-old Londoner Lovelle launches itself at you, all gut-pummelling bass dollops and clattering beats. Anchoring the whole thing is Lovelle’s versatile voice – one minute cooing softly, the next reading the riot act. Unbelievably, she’s currently unsigned"

"Lovelle’s got A&Rs in a spin with her debut single Uh Oh which is featured in a global Max Factor ad. We can see why"

Beverley Knight's A64 for SBTV

Stonefield "Through The Clover"

The four Findlay sisters have stepped out of their rehearsal shed in the Victorian hills with a sound that quite simply rocks! Zappa and Zeppelin inspired, 70s soulful rock ‘n roll and stellar song writing are the reasons these four very talented girls have everyone sitting up and taking notice. Amy, the eldest is on drums and lead vocals. Hannah’s on guitar, Sarah plays keys and backing vocals and Holly is the killer bass player/screamer. Stonefield may be a young band but these girls can play and their live show is blowing crowds away.

They’ve supported the likes of NERD, the Temper Trap. Cat Empire, Children Collide, and British India since forming the band in 2006, but 2010 has been their biggest year yet.

In 2010 they won triple j’s Unearthed High competition, which led to two songs ‘Through The Clover’ and ‘Foreign Lover’ being played on high rotation on the j’s. An invitation to play at One Movement in Perth saw the band play in front of thousands of industry folk and fans and has led to a spot on the 2011 Glastonbury and The Great Escape line ups.

Stonefield’s debut release ‘Through The Clover’ is a five track EP on Flock/PIAS on June 13th.

The band is now doing a select run of shows around Australia including the St Kilda and Pushover Festivals, Adelaide Fringe in the Spiegeltent, a residency at the Tote with Dandy Warhols drummer Brent DeBoers, Immigrant Union, Apollo Bay and Cherry Rock Festivals, before they headline the Northcote Social Club on April 1.

2010 was a breakthrough year for Stonefield with a nomination for a J Award. However with recent airplay in the UK and US beginning and preparations for Glastonbury, John Peel Stage, 2011 looks even bigger.

XFM have booked the girls in for a XFM Rock session and they will be playing a gig in London at The Enterprise on the 29th June.